What Sets the Core Apart 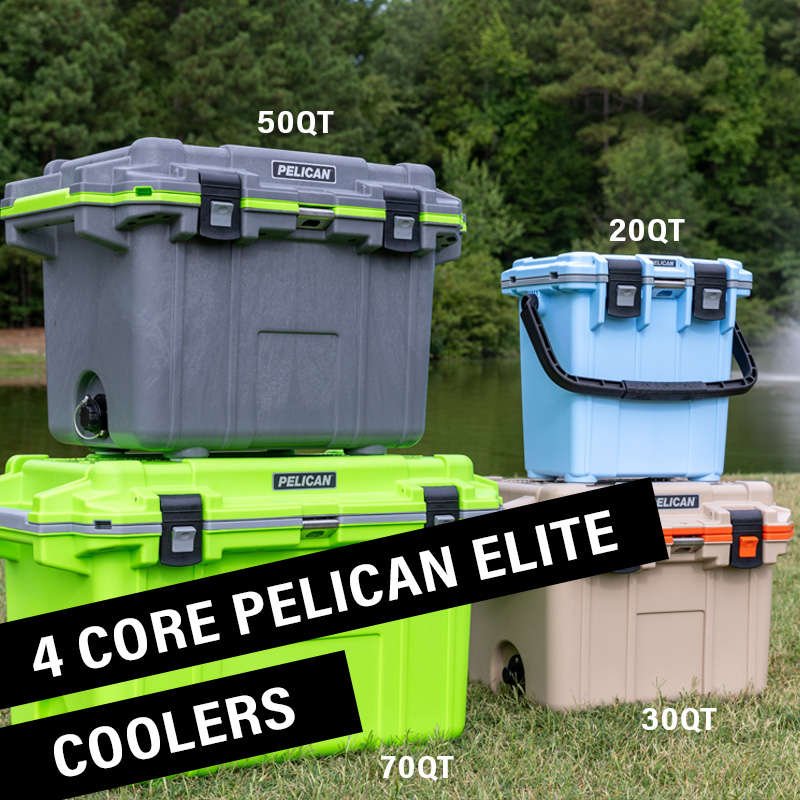 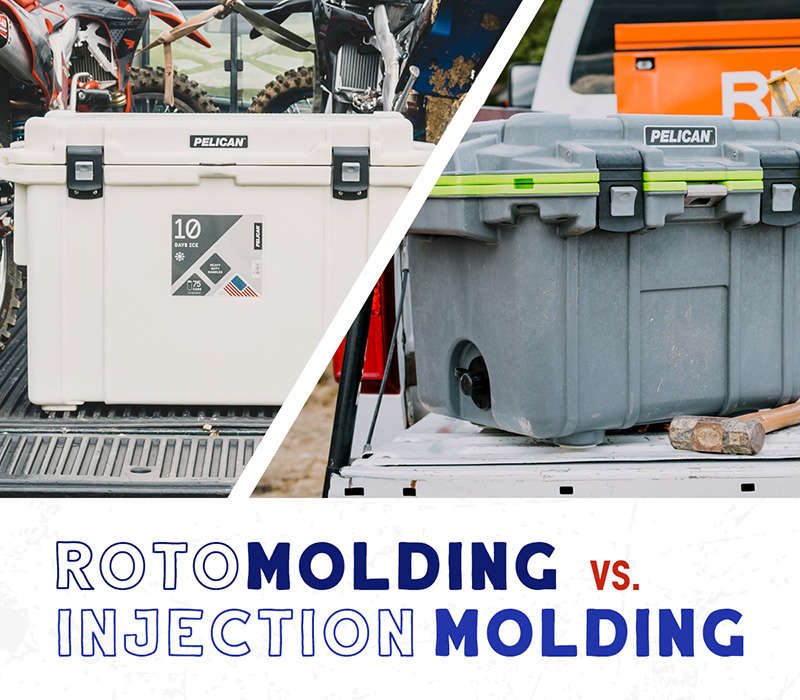 In some cases, an injection molded cooler is up to 30% lighter than a comparably sized rotomolded cooler. But even with that weight difference, there is no difference in performance in that same head-to-head match up. Injection molded coolers Elite Coolers still hold ice for days on end, and can even out-perform rotomolded coolers.
The other, more visually obvious, difference in the injection molded Elite Coolers is their dual-toned color combinations. Injection molding can't be used to create hollow objects like rotomolding can, but Pelican capitalized on this to create coolers that look like nothing else available, with a bold exterior highlighted by a contrasting interior. And the wide variety of color options means there is a Pelican Elite Cooler available to fit any style. 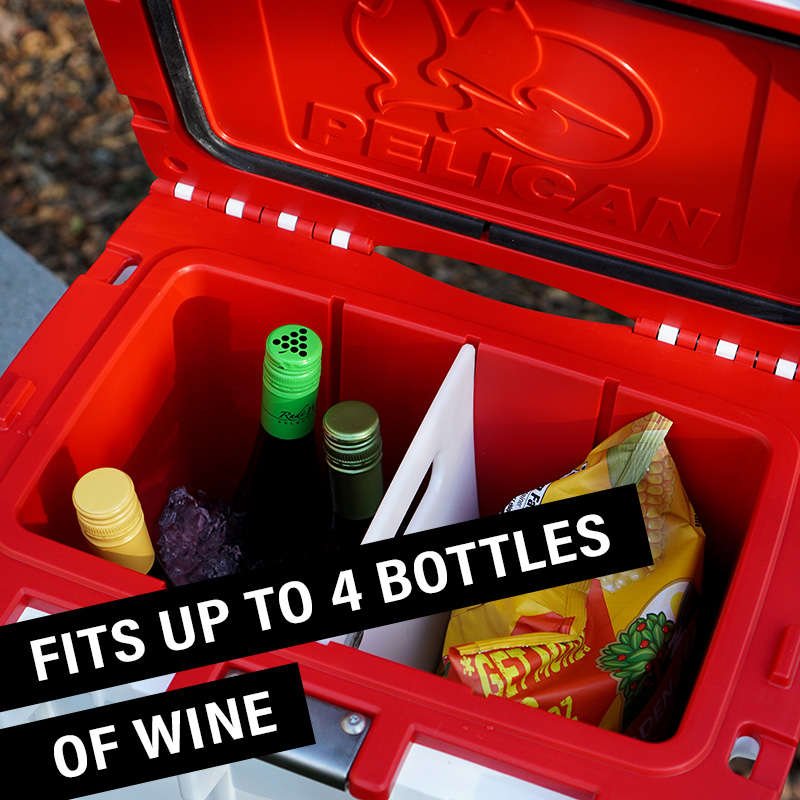 The 20QT Elite Cooler may be the smallest of the core Elite Coolers, but there’s nothing small about it’s performance. Thanks to its unique design it not only has plenty of room for fifteen canned beverages, but it’s also tall enough to fit four wine bottles inside. That high profile also lets this durable cooler comfortably double as a seat if you run out of chairs around the campfire. 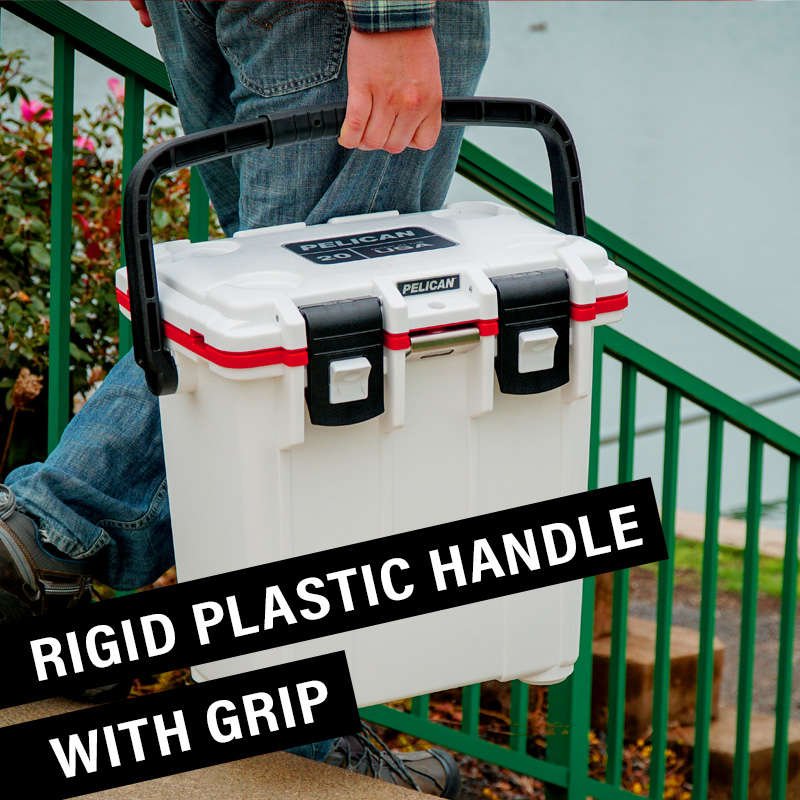 The 1” thick, continuous layer of insulation inside this cooler lets it hold ice for up to two full days with no problems. The 20QT cooler's small size makes it ultra portable. It’s got a rigid plastic handle with a comfortable rubberized grip, so it won’t swing awkwardly while you’re carrying it, and it weighs in at a mere 12.5 lb empty. Plus, the 20QT Elite Cooler comes in 10 different color options that will fit any style. 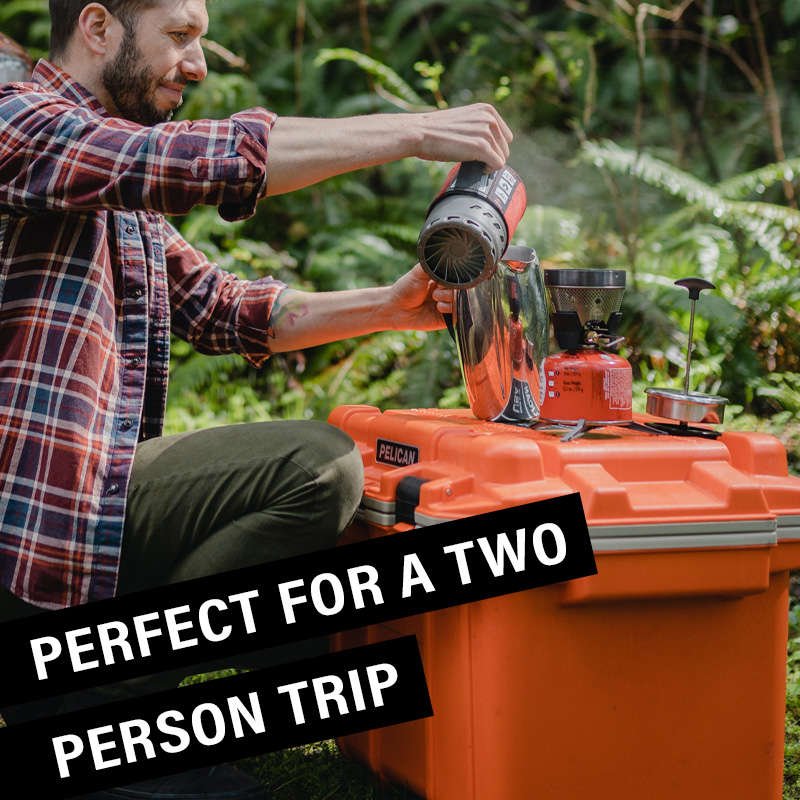 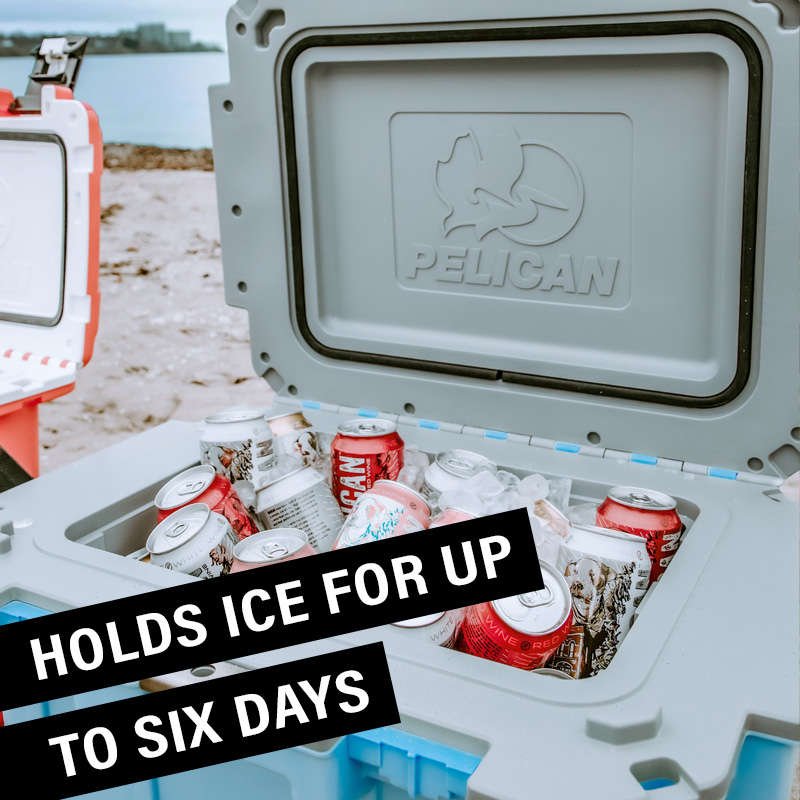 So where the 20QT can hold ice for a weekend, the 30QT Elite Cooler will hold ice for up to six days! Just follow the 2:1 ice ratio and you will still have room for lots of food or 22 canned beverages. Either way, you’ll be set for some true quality time on a trip for two. 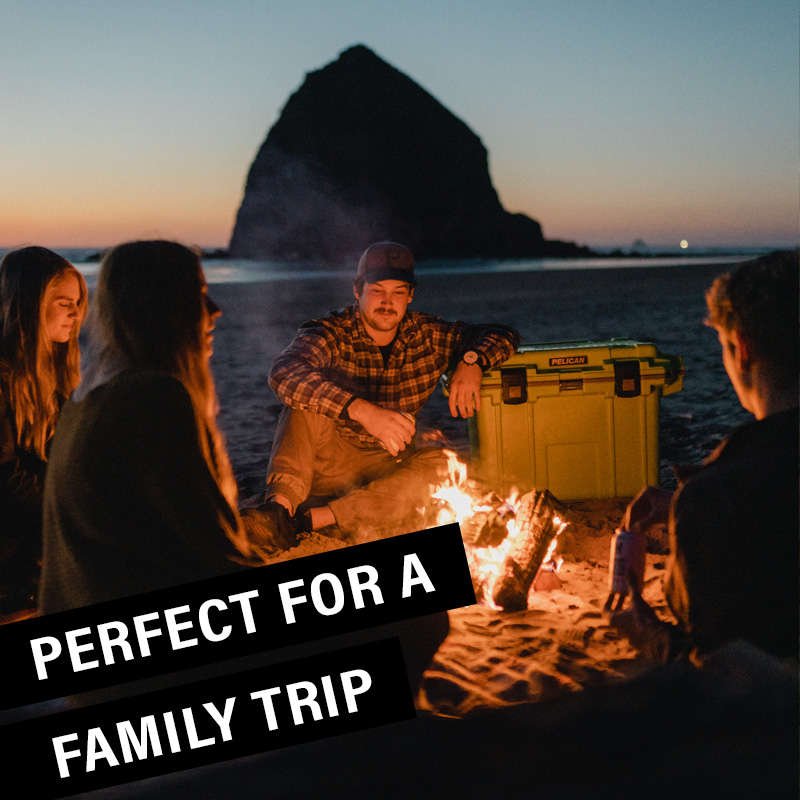 The 50QT Elite Cooler is the one to bring on a family trip. This 50QT cooler has plenty of room for food and drinks to last a long-weekend of camping for a family of four. You can count on everything to stay very cold thanks to the eight day ice retention you’ll get from a 50QT Elite Cooler. 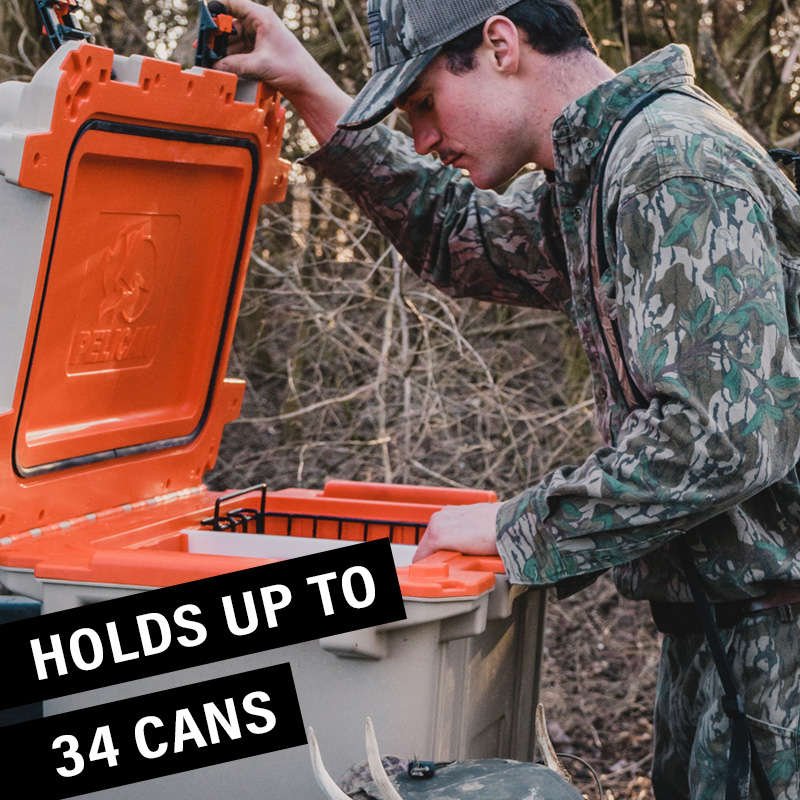 Or you can go on a longer trip and pack two of these coolers: one for food and one for drinks. This will increase ice retention in the food cooler, since you’ll be opening it less, and you’ll be able to keep up to 34 canned beverages frosty cold in the drink cooler. And that is just one suggestion to get the best performance from one of the core Elite Coolers! 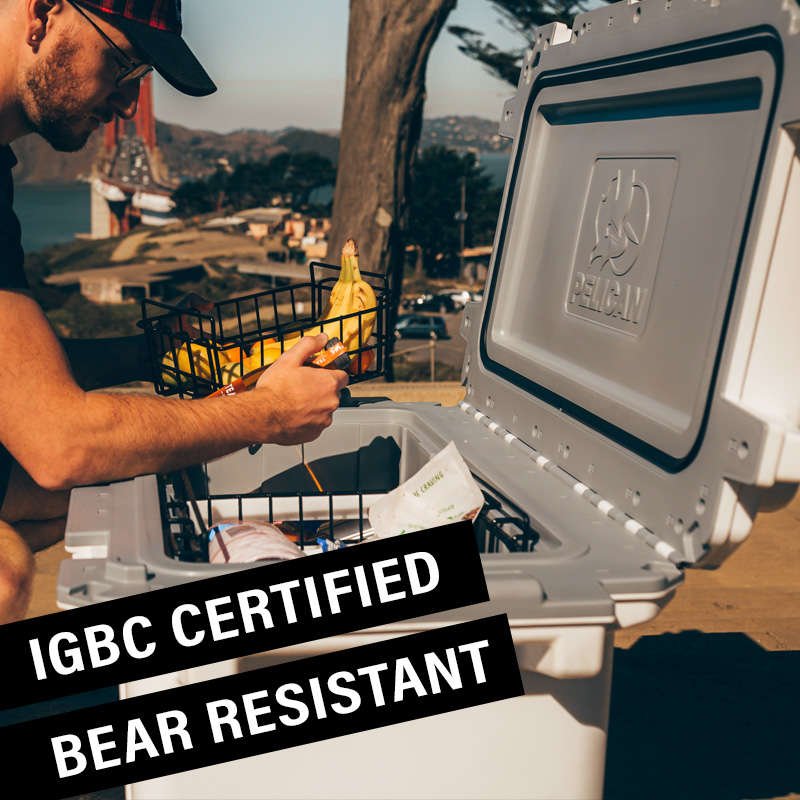 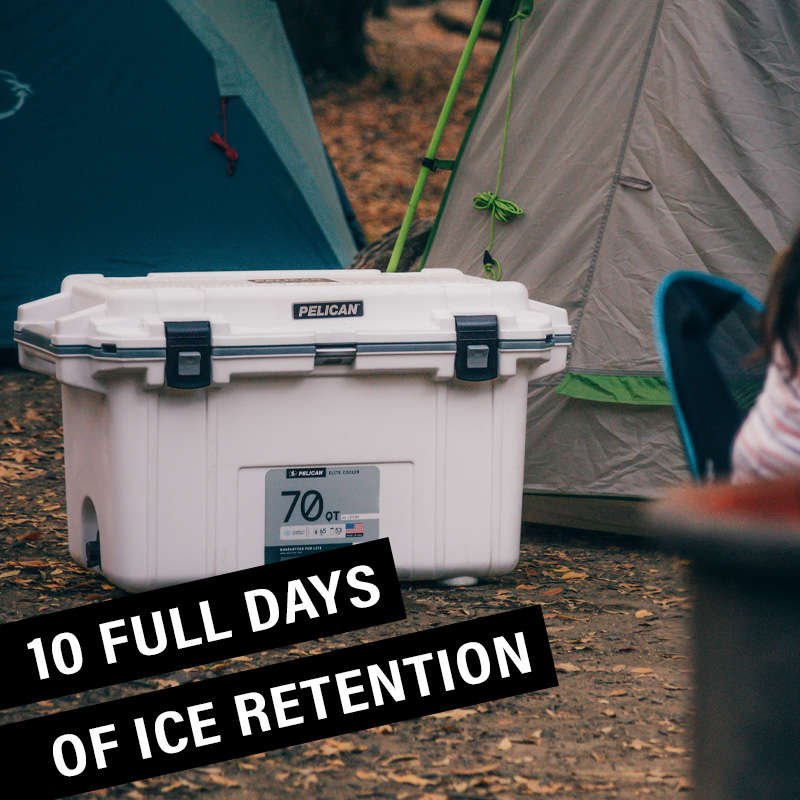 This 70QT cooler will hold ice for up to nine full days and can carry 48 canned beverages! So start planning that crazy adventure now, because this cooler is ready to go on it with you.

Standouts For All the Right Reasons

In a market filled with squat, heavy rotomolded coolers in muted colors, the core Pelican Elite Coolers are true standouts! And it isn’t just the design that makes them stand out. Their incredible performance will always deliver, and can even be increased with a couple of key accessories. And this phenomenal performance is backed up by a lifetime warranty. That’s not as common in high-end coolers as you might expect. If you still can’t decide which cooler you need, why not get several? With two or more core Elite Coolers you will be sure to have the best cooler in the perfect size for any adventure.