Q. What is pre-chilling and do I need to do it?

Pre-chilling is the process of cooling the insulation in your cooler down before you use the cooler to increase the efficiency and ice retention of your cooler. Pre-chilling has a huge positive impact on your cooler’s performance, which is why it is so important to do every time you use your cooler.

Think about it like this: coolers don’t make cold; they maintain cold. And the way they do this by using thick layers of polyurethane foam to store thermal energy. Most Pelican Elite Coolers have a 2” thick, continuous layer of polyurethane foam (the 20QT Elite Cooler has a smaller layer of foam due to its smaller size). When you’re storing your cooler between uses, this foam is maintaining the thermal energy of its surroundings. So a cooler you’ve been keeping in the garage doesn’t start out cool, it starts out garage temperature, and in the summer that can be HOT. 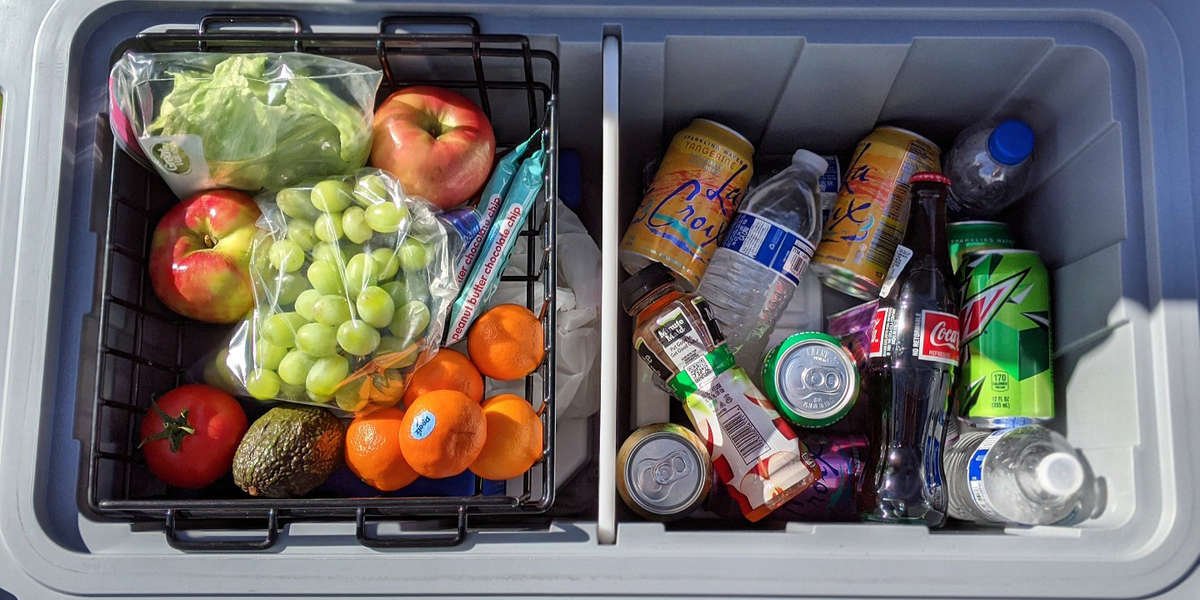 To pre-chill your cooler, bring it inside 12–24 hours before you plan on using the cooler and fill it with sacrificial ice. This ice will melt, and this phase change from solid to liquid will absorb the thermal energy within the cooler, which will in turn cool down the polyurethane foam of your cooler. Once your cooler is pre-chilled, you can empty out the meltwater and pack up your cooler knowing you’ve prepped it to get the best performance possible.

Q. How much ice should I use?

To get the best performance from your Pelican Elite Cooler you should use twice the amount of ice as goods you’ll be keeping in the cooler. The 2:1 ice ratio is the standard ratio of ice to goods recommended by manufacturers of high end coolers. A combination of block ice and cubed ice is often the best way to go. Block ice, or even reusable Pelican Ice packs, can be used to make up the bulk of the ice in the cooler. Block ice is compact, which makes packing your goods around it easier, and it melts more slowly than ice cubes. Ice cubes can then be used to fill in the gaps between your goods; remember that less airflow within the cooler means longer ice retention. 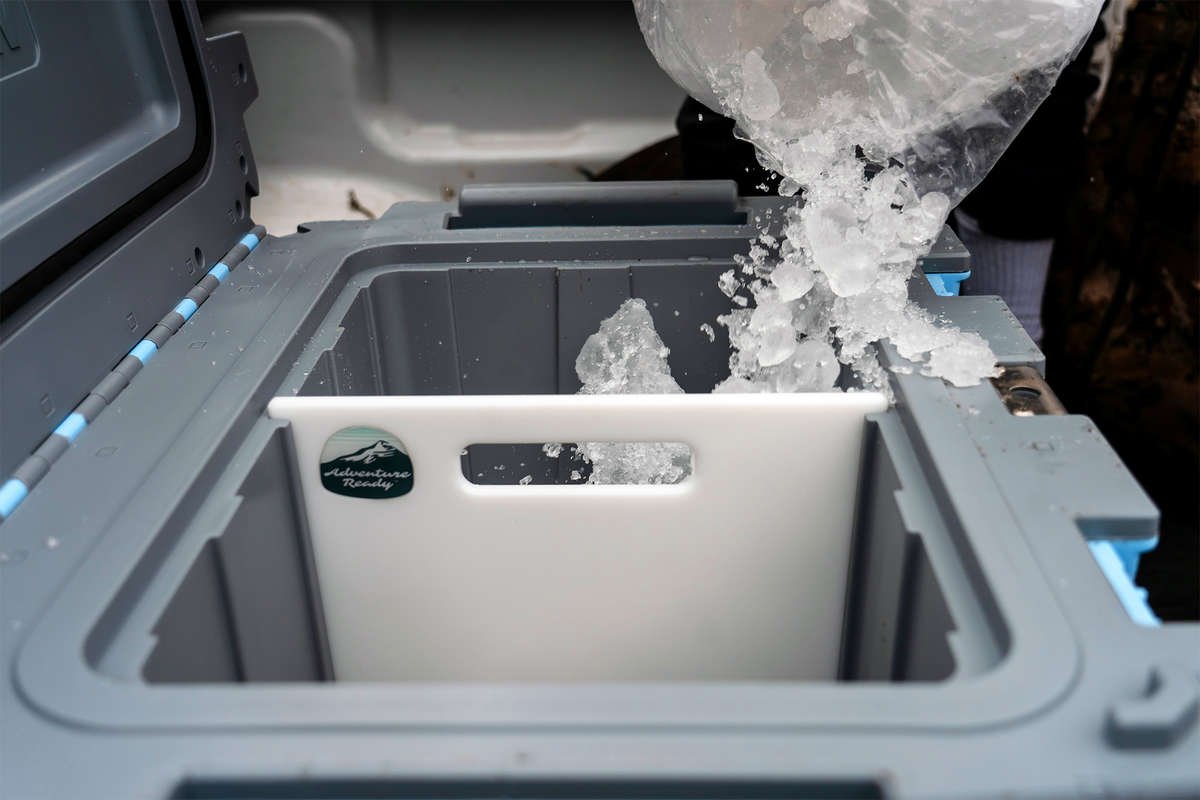 Q. What effect will the color of my cooler have on its ice retention?

This question has a simple answer with a big caveat. This simple answer is that yes, the color of your cooler will have an effect on its ice retention. Let’s say you have two 50QT Pelican Elite Coolers, one white/grey and one dark grey/green. The dark grey/green cooler gets its color by absorbing a range of light wavelengths, and the energy from the light is converted into heat. The white/grey cooler reflects a wider range of light wavelengths, and so less energy is converted from light to heat. So the dark grey/green cooler will be warmer and the ice inside it will melt faster.
Now for the big caveat: both of these Pelican Elite Coolers have the same amount of polyurethane foam and they hold the same amount of ice. So while the dark grey/green cooler may convert more light into heat, the impact of this additional heat is minimal. The difference in ice retention between the white/grey and the dark grey/green cooler amounts to a matter of hours, and when your 50QT Pelican Elite Cooler is capable of holding ice for as long as seven days, a couple of hours isn’t going to break the bank. You can even mitigate the effect of the light on your cooler by keeping it in a shaded area when you’re using it—for instance, under a tree or a canopy.

Q. Why is there a gap in my cooler’s gasket?

All hard-sided Pelican Elite Coolers are designed with a small gap in the gasket. This gap is usually between 1/8″ and 1/4″ and will not affect the performance of your cooler. When Pelican redesigned their coolers in 2016, they introduced this feature to act as a pressure release due to customer feedback that the coolers were difficult to open during use. In addition to making your cooler easier to open, the gap also makes it safe for you to use dry ice in your cooler. 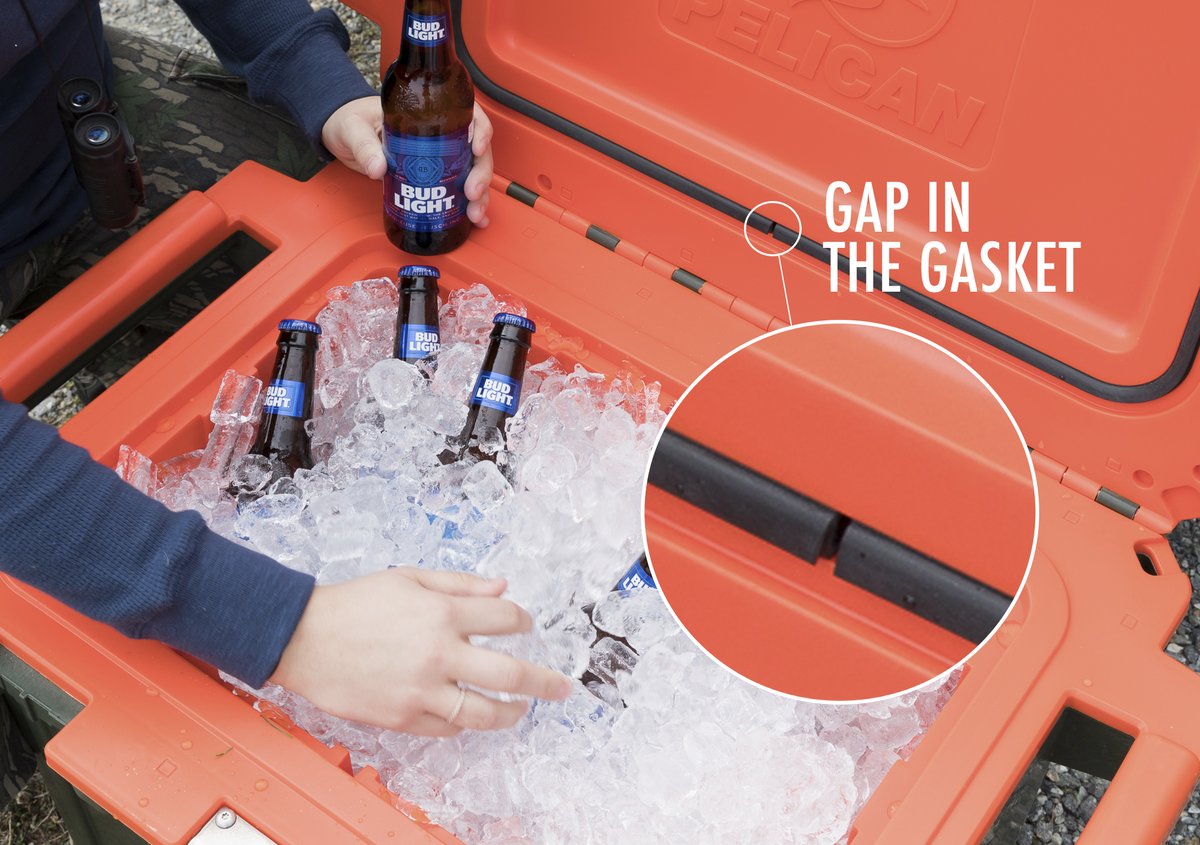 If the gap in your cooler’s gasket is larger than 1/4″, you can uninstall your gasket and then reinstall it to make the gap smaller. The gasket sits in a groove in the lid and can easily be pulled out and then pushed back in. Leaving the uninstalled gasket in a warm spot (like a sunny windowsill or by a heat register) will relax the rubber and make it easier to reinstall.

Q. Is my cooler watertight?

Hard-sided Pelican Elite Coolers are not designed to be water tight. While they use a freezer-grade gasket, they are not intended to be air– or watertight. An air-tight gasket in combination with the cold environment within the cooler would create a vacuum and make it difficult to open the cooler. We’ve seen customers with first generation coolers who had to use crowbars to open their coolers.
Pelican soft coolers are watertight when fully zipped closed. This seal keeps them from dripping on you when you’re carrying them. Because Pelican soft coolers are watertight they are not suitable for use with dry ice. Sealing dry ice inside of a Pelican soft cooler can cause the soft cooler to explode.

Q. What are the marks on my latches?

The latches on hard-sided Pelican Elite Coolers are made of injection-molded ABS plastic. When these latches are removed from their molds, they have excess plastic at the point where the molten plastic was injected into the mold. This excess plastic, often called flashing, has to be manually removed from the latches, and as it is removed the latches often end up with light scratches along the top. Because this is the method by which all the latches are made, these marks are considered to be within manufacturing standards and are present on all the latches.

Did we miss any of your questions? You can always reach us at sayhello@elitecooler.com to get the answers you need! Pelican Coolers in the Healthcare System